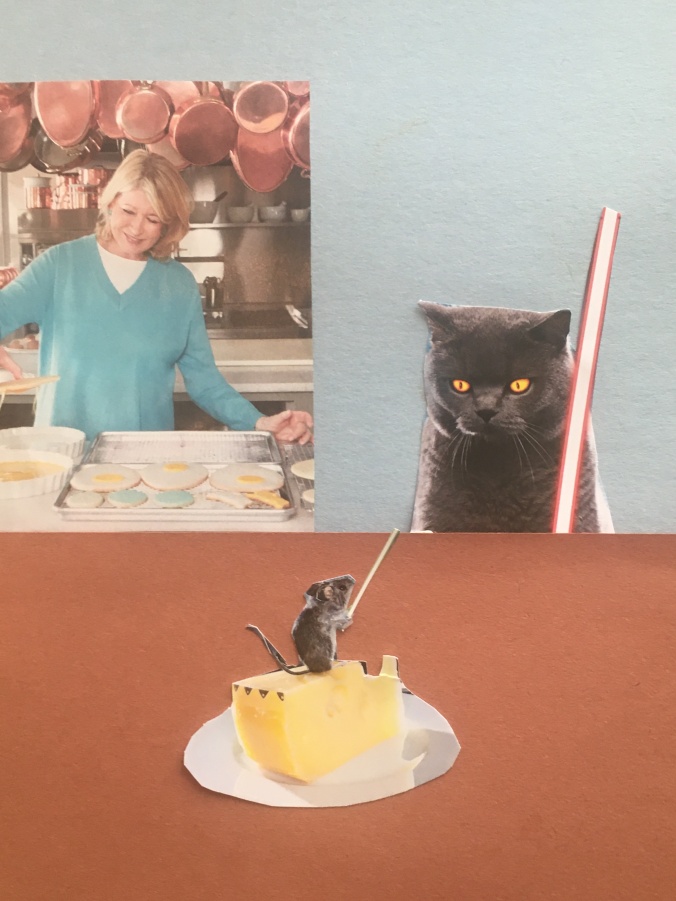 “I sense a disturbance in the Force,” says Darth Feline, rising up from his seat on the living room couch. The whiskers of the fearsome calico twitch as he sniffs the air. “Hmmmm … cheese … yummy.”

Darth Feline hops from the couch and dashes toward the kitchen. There, he finds the Supreme Leader making a phone call.

“Let’s re-schedule next week, Mom,” says she, her tall legs nearly tripping over her house pet.

“Oh, sorry, Darth!” says the Supreme Leader, reaching down and petting him behind his ears.

Darth Feline enjoys a brief consolation rub, and then the Overlord exits the kitchen.

Alone, the calico sighs. He leaps onto a chair and peers over the tabletop. Unfortunately, he is not alone. His rival, Luke Mousy, stands proudly on a chunk of cheese.

“Paws off, Jedi!” Darth Feline hisses. “I won’t fall for another one of your mind tricks!”

“Of course you will, you always do,” says Luke Mousy, scooping a piece of cheese and popping it into his mouth. “How can you resist? I stand for truth, justice … and delicious morsels!”

”Isn’t there a cheesy way?” says Luke Mousy, drawing his green lightsaber. “I’d love to do it that way!”

“Not for you, squeaky thief!” says Darth Feline, swinging.

Luke Mousy flips off of the chunk of cheese and lands on the tabletop. He slices off one of Darth Feline’s whiskers.

“Ahhhh!” hollers Darth Feline, falling off the chair onto the floor.

The feisty cat and mouse embark on an epic rumble, sending themselves and kitchen appliances to all corners of the galaxy.

At last, Luke Mousy retreats to his rebel base, a hole in the wall. Before he disappears into the darkness, he hears a scream. He turns to see the Supreme Leader looming over Darth Feline, scolding him with a pointy finger.

“What happened in here?” she shouts. “This place is a mess! Why can’t I ever leave you alone with food?”

Luke Mousy grins as he licks a crumb of cheese from his claws.

He loves getting Darth Feline in trouble. 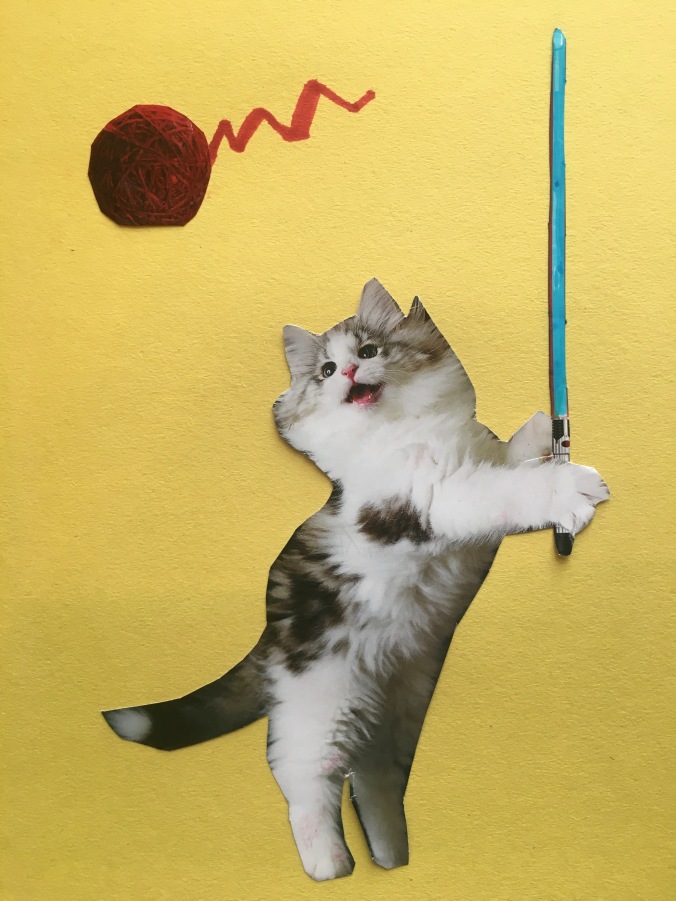 In a feline domain far, far away, two rival cats are up to their old tricks.

Jedi Yarny is strutting down the aisle of the mother ship (a.k.a., the living room) when a ball of yarn rolls past him.

“The Force has awakened my favorite knot of red string,” says he with widened eyes. “Maybe I should play with it?”

Jedi Yarny pounces on the ball, and as he wrestles with the string, he hears a loud, “BEEP – BEEP – BEEP …”

“No, sir,” says a Storm Trooper mouse appearing from its hideout behind Mother Snoke’s throne (a.k.a., the couch). “It’s just the tea kettle sounding off. Your milk is ready.”

“Of course,” says Jedi Yarny. He tosses the ball of yarn aside and prances out of the living room with a raised tail.

Inside the kitchen, a bowl of warm milk awaits the Jedi knight kitty along with his nemesis, Sith Purr.

“I hope you enjoy this concoction I asked Mother Snoke to prepare for you,” says Sith Purr with a smirk.

“Hmmmm … looks tasty,” says Jedi Yarny. “How gracious of you — a rare treat.”

Sith Yarny sips the milk and is quickly overcome with gas.

“How dare you betray my butt!” hisses Jedi Yarny as he farts his way to the lavatory (a.k.a., litter box). “This Force never ends … ahhh … diarrhea!”

Jedi Yarny watches his plan unfold from the rebel’s outpost (a.k.a., the love seat). Sith Purr naps by his side.

Through the window, Jedi Yarny sees the deliveryman arrive.

“Just in time,” says the feline.

Jedi Yarny watches Mother Snoke unpack a scratching post. When she is finished, she returns to her master’s chamber.

Jedi Yarny fumbles through the closet. He adds a secret surprise to his rival’s present.

“Rise and shine, my Sith overlord,” says Jedi Yarny as his nemesis awakens. “The Force bears you a gift.”

“A scratching post, yippie!” says his lordship, tackling the furniture piece. As he tumbles on top, a light dusting of itching powder rises into the air, smothering the Sith kitty.

“Wait … what’s this?!” his lordship yowls, scratching himself silly.

“A little something to remind you who loves you, my friend,” says Jedi Yarny with a grin. “Now, we’re even.”

“More like even … for now!” Sith Purr hisses as he retreats into Mother Snoke’s chamber.

Stay tuned for the next episode of Cat Wars, featuring Luke Mousey and Darth Feline in “The Battle of the Cheese.”