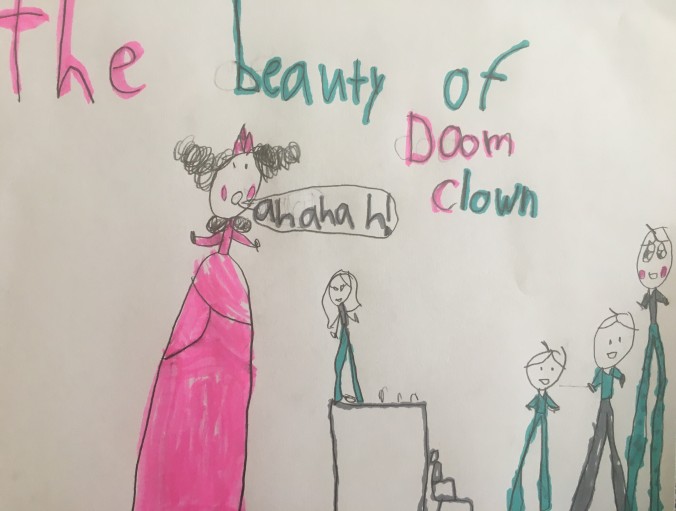 Jack and Ryan were concerned because Uncle Jake was coming to visit, and they didn’t want Doom Clown to ruin their fun with him.

There was a knock on the door.

It was Uncle Jake!

Behind the door, Doom Clown stood with a knife, ready to surprise him.

Jack opened the door, and the two brothers quickly dragged Jake through the living room into their bedroom closet.

“Well, I’m glad to see you guys, too, but you hurt my arm … and how about a hug? And what’s with all the secrecy?”

Both boys embraced their uncle.

“But we’ve got a problem,” Ryan said. “There’s a homicidal clown running around the house, and we need you to help us stop him!”

At that moment, there was a scream.

Autumn, the boys’ little sister, was in trouble. Or so they thought.

They ran to her bedroom and found Doom Clown, seated at her bureau, screaming like a girl.

Autumn was putting makeup on him, making him look like a princess.

“Well, this isn’t really my style, but she is kind of cute … hey, lady, are you single?”

He pressed a button on his watch and disappeared in a cloud of smoke.

But when the smoke cleared, they realized he hadn’t escaped at all.

He was stuck. In the mirror.

“Oh, no!” said Doom Clown. “I must have pressed the wrong button on this darn watch …”

“Lucky us,” Jake said. “Looks like we get the last laugh, after all.”

The mirror swirled in smoke and his face faded in the darkness.

Follow Not Your Father's Bedtime Stories on WordPress.com
Join 148 other followers